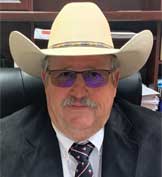 The Patrol Division is the largest and most visible function of the Gonzales County Sheriff’s Office. It is the first line of service to the citizens of Gonzales County. Deputies assigned to this division are dedicated to providing patrol and emergency response service 24 hours a day 365 days a year. Patrol is commanded by the Chief Deputy, with the assistance of the Operations Captain. Each shift is supervised by a Patrol Sergeant.

Patrol deputies patrol and respond to all calls for service within the 1000 square miles of Gonzales County, as well as providing law enforcement assistance and emergency response in the incorporated cities of Gonzales, Nixon, Smiley, and Waelder.

Patrol duties include responding to various criminal and civil incidents, crime prevention, traffic and D.W.I. enforcement, and public service assistance. Patrol deputies are also responsible for investigating misdemeanor offenses. Each patrol unit is equipped with a Mobile Data Computer (MDC) which enables the deputies to communicate with other units and Dispatch.

The Criminal Investigations Division (CID) is responsible for investigating all felony crimes against persons and property. The division is under the command of the Chief Deputy, with the assistance of the Operations Captain. A Sergeant Investigator supervises the division, which consists of one Deputy Investigator and one Narcotics Investigator.

CID is responsible for preparing all cases for presentation to the Gonzales County Attorney’s Office for Grand Jury Indictment and any subsequent prosecution. They also receive, store and maintain all evidence collected by members of the Sheriff’s Office.